Advertising and Marketing by a Self-Publishing Writer


There are many apprehensions and dilemmas on the saleability of books with which a self-publishing writer wrestle. They are the cause of forming such questions.

1.  Will the book sell?
2. How will one sell the book?
3. How will the writer advertise his book? How much has to be spent on such activities?

Let me begin with a display of the report of my sales which had taken place in the last thirty days up to November 23, 2019. 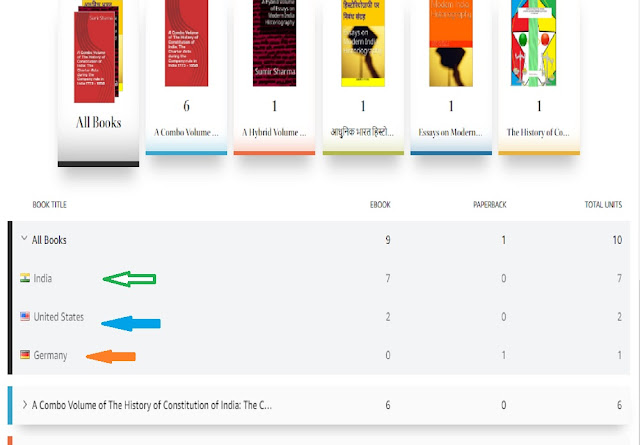 Allow me to present my analysis on display. I am not a statistician (I envy them, and I do not know much about statistics). I direct your attention to the arrows in the display.

The arrows are aimed at three countries, namely India, America and Germany. These were countries where my books were bought. I substantiate it by adding that I am from India and write with an Indian audience in mind.

Look at the titles which were sold. They are five.

To achieve the figure for sale for November 2019, I have adopted following means.
1. I regularly posted on the multiple blogs on the titles. I  have published four books in the last sixty days. The posts on them provided information on the release of the titles. One of the titles is an older one. It is a well-received title by now. I keep on writing about the subject matter in that book on my blogs.
2. I have availed the services of Amazon Advertising. I have started ad-campaign in the category of sponsored items.
3. I have developed three pages on specific titles on Facebook. I posted separately on each page.
4. I post the information on my timeline on Facebook.
5. I have availed the Free download campaign of Amazon only for two days. I did not promote this campaign.
6. I have not availed the Google Advertising. I find it cumbersome. I have not developed faith in their results.

For achieving the above results, I have not made any special efforts. I have incurred a cost of nearly ₹ 200.

Apart from the above-mentioned sale, there was sale in Kindle Unlimited also. The collection from KNEP is never much. It has remained less than ₹ 100 per month for the last twenty-four months. However, I believe if the books were read in that programme, it was a result of the marketing and advertising pointed out earlier.

In brief, to promote my books, I have used the following three methods.
1. Blogging
2. Facebook
3. Amazon Advertisement

My Impression
For me, the fascinating thing is that my titles are sold across the borders. The copy sold as a paperback. Some months back, and that was in July, another paperback was bought in Japan. The books were sold in America and Canada. I do not find any possibility of a sale for reprints within India. The main reason is that the prices become too high because of the customs charges and courier expenses. In Europe and America, it is generally less than 10 Dollars or Euros. Secondly, the paperbacks are manufactured on those continents, and they have simpler customs regimes. Apart from that, the ebooks have been sold on Amazon.com, and that could include a more prominent geographical region. All this had been achieved with the help of marketing and advertising methods mentioned earlier.

I hope that this analysis may have answered the question with which this article has begun. To be specific, I state that the book sells if you adopt some substantiating marketing and advertising methods.

In the case of writing posts on the blog, it should not hold any writer for making such an effort. The writing is the actual nature of the writer. The writer may write his book. The writing of a post on a blog is also an act of writing. It compliments his actual activity. Therefore, writing a post on a blog is not a wasteful activity. If one writes, then only a reader will get a chance to read. I must bring in a recent survey from MRUC, which states that the readership of printed news media is increasing. Their readers are there.

Now the issue of selling of the books. I believe that who is bogged down by apprehensions of the possibility of finding a buyer is the victim of their thinking. They have to grow out of binding of their region. They have learned about a peculiar process of impression development in mind while living a particular society. They have to expand beyond their social limits. There may be intelligent and successful people in a social system which force you to follow a set course of success. You learn that you have developed this mindset in a particular ecosystem. You have to burst out the chains of their ecosystem and set yourself free. BREAK Free. Then only you can frame the right questions.

The evaluation based on the actual profit made is a reliable criterion. Even I want to earn a lot of money. Who does not? But, for a Self-publishing, you have to check the questions which you frame. Become aware of the process which formed that question. After that, you must learn to learn. Yes, learn to learn. Do that on your own. Therefore, the principle is to learn on your own. It requires a different type of formation process. You have first to learn, that to be scientific, it does not mean that you get the reports of the scientific associations. They are good. But, your dependency on the reports only for the results is not okay. Being scientific does not mean to collect a large quantity of data. That is one of the methods. But you must learn another way of a scientific approach, and that is experienced by doing an activity. That will change the diction and form of a question.


Catalogue of the Books written by Sumir Sharma

Popular posts from this blog